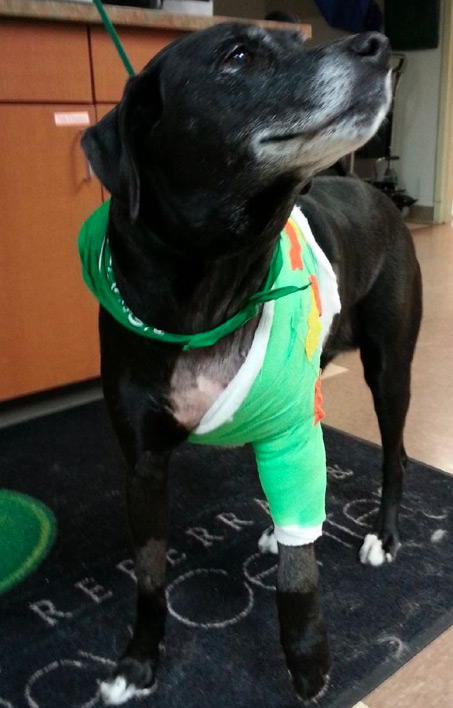 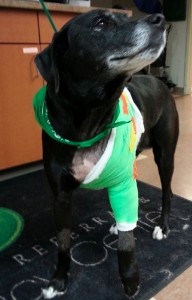 This is Holly. She is a very sweet labrador retriever who had an unfortunate encounter with a horseshoe stake as she ran into the stake and sustained a large wound to her left front leg. Unfortunately, a flap of skin was pulled away from her body resulting in a large area of missing skin.

Holly’s owners qualified for the Angel Fund and Holly was placed under anesthesia and the unhealthy tissue was removed. The wound was cleaned and a VAC (vacuum) bandage was applied to the wound. VAC therapy promotes wound healing through Negative Pressure Wound Therapy (NPWT). By delivering negative pressure (a vacuum) at the wound site, the device helps draw wound edges together, removes infectious materials, and actively promotes healthy/healing tissue.

After 48 hours of VAC therapy, the vacuum bandage was removed and the majority of the wound was sutured closed. Due to the large area of missing skin, initially, the wound could only be partially closed and six days later, the remaining portions of the wound were sutured closed. Holly is doing great and her wound is healing beautifully. We plan to see Holly back next week for skin suture removal. After that time, we expect her to return to life as before (just without any horseshoe stakes in her way!).