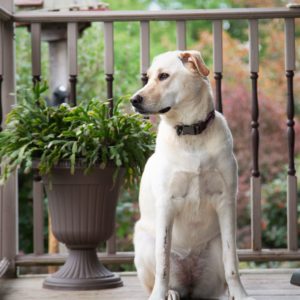 Shiloh presented at VREC after being struck by a vehicle earlier in the day. Her owners witnessed the accident and immediately rushed her to their nearby primary care veterinarian to be stabilized. Once stable, the veterinarians recommended she be seen at VREC as soon as possible. Upon arrival at VREC, it was noted that she had sustained serious radius/ulna fractures on both of her front legs but – miraculously – sustained little trauma anywhere else.

A dog’s forelimb has two bones between the wrist and elbow: the radius and the ulna. If the radius is fractured, the also ulna usually fractures, and it is important to correct the fracture properly to ensure the most successful outcome. Using plates and a series of screws, our surgery team was successful in repairing both of her fractured legs. Repairing the fractures with a plate and screws helps the pet recover faster, lowers the risk for additional surgeries, and offers better range of motion.

Shiloh qualified for the Angel Fund and was able to have the best care possible. After surgery, she was hospitalized for a few days to ensure the incision sites began healing properly. After being discharged to recover at home, she was seen by our surgery staff for radiograph re-checks to ensure her bones were healing properly. Other than the scars from the incision sites, nobody would know Shiloh had sustained such injuries!